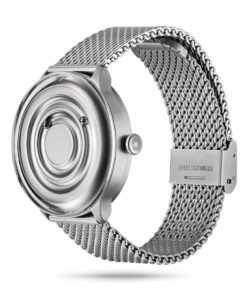 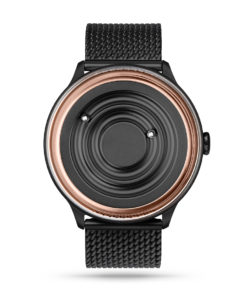 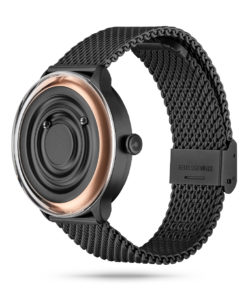 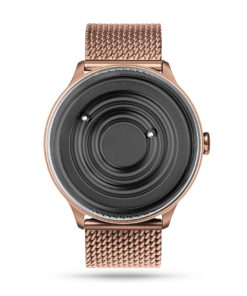 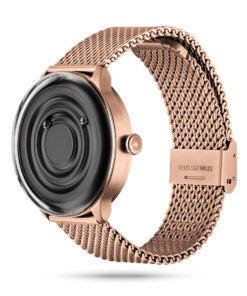 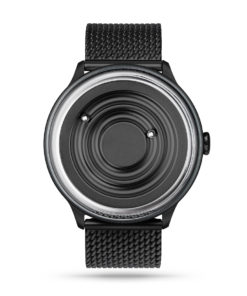 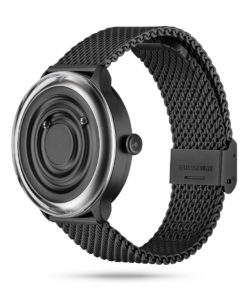 This timepiece is named after the planet that produces characteristic jetstreams and cyclones by the strongest magnetic field in our solar system.

As with all watches in our collection, we focus highly on the bare essentials. This is evident in the minimalist, yet unique hydraulic pressed dial paired with a convex crystal class.

The name Jupiter came to our mind not only because the watch face reminds us of Jupiter’s characteristic jetlines and cyclones. Jupiter also has the biggest magnetic field of all planets in our solar system, which matches a watch design that was all about magnets from the start.

“The Jupiter watch has a longer development phase than it might look like, the design process involved a couple of other different approaches of a watch with magnets as a key element.”

“I had the very first idea of a magnetic watch when I stumbled upon a so-called flux detector foil, which is a thin film than can visually detect magnetic fields. My idea was to create a watch face that has no visible hands or stem, but only consists of rings created by magnets underneath. After prototyping this idea, we hit on some technical problems, so we ditched it and tried different other takes, for example using some kinds of powders and liquids.”

“But after all, I ended up with this simpler and – in my opinion – more beautiful design that you can see today. It still has no visible hands and a similar appearance like the very first approach. In addition to that, I combined it with another earlier design of a watch casing where the dial is kind of “pushed” into the glass. This way, it would be enclosed by the glass also from the sides, which creates interesting inner reflection from surrounding light.”

Evolution of the Jupiter design, from iron powders to flux detector foil.

Join Waitlist We will inform you when the product arrives in stock. Please leave your valid email address below.